You are here: Home / Archives for Lawn & Garden

We have looked at the best way to plant grass seed and how to know if you have high quality grass seed.  Equally as important is knowing how to pick the right type of grass seed you need to plant for the conditions of your lawn; i.e., shady, sunny or wet and the particular area of the country. END_OF_DOCUMENT_TOKEN_TO_BE_REPLACED

The title “Vegetable Garden Bugs On The Attack” sounds like the name of a science fiction thriller movie! Fortunately for us the bugs aren’t giant sized, man-eating critters. But they can be a formidable foe when it comes to controlling their voracious appetite. You can go to bed one night feeling really good about the condition of your garden, just to get up the next morning to see holes in the leaves everywhere.

You need to narrow down what is happening to your plants and if you see any signs of the bugs still being on the plant. There is no need to spend money haphazardly just because you think you know what might be going on. Check to see if it is a chewing bug or not. Also, make sure it is not a fungus that is attacking your plant because that is a whole ‘nother story. If you have any doubts, it is best to take a sample to your County Extension Agent to receive a definitive answer to the problem.

Let’s focus on 3 of the chewing bugs:

When fighting all types of bugs, it is important to make sure you don’t have weak or stressed plants that will then become the target for the bugs.  You can create a bird habitat that will draw songbirds to your garden to eat those pesky insects that do take advantage of your good nature & mother nature!  Lastly, take care of the ground in which you plant your vegetables.  Add some good organic material to the soil, be sure and clean up any diseased plants and remember to rotate your crops.

If in doubt of what your soil might need, take a soil sample to your County Extension Agent so they can tell you what ratio of amendments you will need.  But remember, whether you are seeing holes from vegetable garden bugs in the leaves or not, get Thuricide today and be prepared!

My previous post described how to plant grass seed whether you are planting new or over-seeding your lawn.  If you are going to do that work, then make sure you have purchased high quality grass seed.

Pennington’s Smart Seed has been carefully selected to ensure you grow the best lawn. The varieties were chosen not only for their ability to produce a thick, lush, healthy lawn, but also for their improved drought, disease and insect resistance versus other grass seed varieties.

The Penkoted® seed technology contains a fungicide that literally seals and protects each seed while in the ground, improving its ability to grow into a healthy plant. This technology is used in every bag of Pennington’s Smart Seed along with their newest exclusive technology MYCO Advantage™.

Naturally occurring soil micro-organisms can become destroyed or depleted over time, from either environmental stress, the use of harsh chemicals or today’s construction practices, including grading of home and building sites. This can cause a  lifeless, compacted soil that makes it very difficult to grow grass much less a thick, lush, healthy lawn. 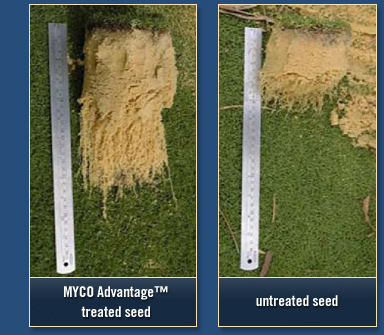 A “picture is worth a thousand words” is so true with this comparison.  Personally, I want the extra help to have a successful and beautiful lawn.  I simply do not have the time in my busy schedule to baby a lawn past getting the ground prepared, seed planted and keeping it watered.

Pennington’s Smart Seed is one of the best grass seed products you can find on the market that explains how to plant the grass seed and uses MYCO Advantage™technology that results in more success. I have sold several types of grass seed and am more pleased with this product than any other.

What means the most to me when picking the right grass seed? The ease in planting, the quality of the seed for germination and grass seed developed to resist diseases.

Bare Spots & New Lawns
Remove all debris from planting area
Till or rake to loose top 2″ to 3″ of soil
Rake smooth to create a flat, level planting area

2. Fertilize Planting Area
Apply a starter fertilizer
Lime may need to be added in some areas to ensure proper soil pH levels

4. Water Seeded Area
Water daily to keep soil moist
Do not allow the top 1/2″ of the soil to become dry until seedlings have completely emerged
Once grass becomes established, reduce watering to 1/2″ twice a week

You now have the instructions for how easy it is to plant grass seed or overseed your lawn.  Let’s look next at how to know if you have  high quality grass seeds.

Controlling fall web worms…before they damage your trees, shrubs and some vines. 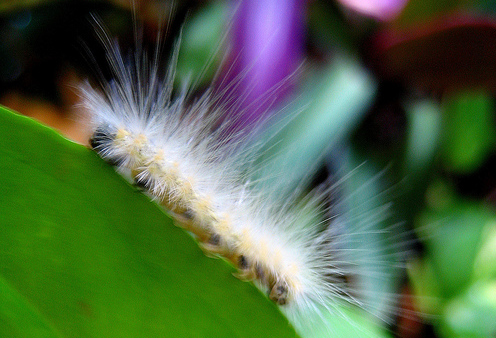 Coming back from NW Arkansas after a college football game, I became aware of the immense fall web worm infestation along the highway. You need to get the information on how to identify and control these web-forming insects.

The fall web worm caterpillar is about 1″ long, is very hairy and pale green or yellow, with either a red or black head. They overwinter as pupae in cocoons that are hidden in either the bark of the tree or in the soil. The moths emerge from mid-March to mid-late April. They are satin white with brown wing spots.

Controlling these pests is important. You can destroy the tents, especially when they are small. Best time is around dusk or early morning when the larvae are in the tent. On smaller trees, they may be pruned and destroyed. But on larger trees and trees with several nests, you need to spray.

Bacillus thuringiensis (Bt) and bifenthrin (Bug Blaster) are effective against the fall web worms. Bacillus thuringiensis (Bt) is a microbial pesticide that can be applied as a dust or spray. It kills many types of caterpillars but has no effect on warm-blooded animals or bees. Always use Bt with care, because it also can kill the larvae of non-pest moths and butterflies.

Bifenthrin is a pyrethroid which has a long lasting residual. Rule of thumb…application should be made when the larvae are small and easiest to control, not when they are full grown and have already done their damage.

Inspection for the greenish egg masses of the fall web worms can be accomplished by looking on the underside of leaves anywhere from spring to late fall. A little extra work inspecting the trees will go a long way in reducing the infestations later in the fall.